Another busy weekend...
I'm looking forward to lunch though...

Breakfast was 2 x Peanut Butter Toast.
Lunch will be Sambal Okra (was it okra that S said or long beans? I can't remember but I'll definitely put a photo up on Instagram!).
Dinner will be pan fried beef in butter, mash potato & probably some veggie.

On Saturday, both J & I brought the kiddos to our church for some Easter event. They enjoyed tremendously though First Born was grouchy for 3/4 of the time. I'm not sure why he's angry but he didn't want to be involved in the games until the time comes for the Magic Show. I believe he's at an age where he gets upset easily & is more rebellious. It's just a phase most kids go through. We'll just have to guide him. =)

Sunday which is yesterday, was a really busy day for me. My church session ended at 11 a.m. & my DFG class starts at 2 p.m. There's a 3-hr gap in between. Initially, I thought I'll be very free to do the things I want & I can relax... Boy was I wrong... J changed my program from a relaxing one to a hectic, pressed for time one.

After church, we went for lunch at MOS Burger. I tried their corn soup & it taste good! I usually take their Clam Chowder soup which is also lovely! Having lunch there, I can say goodbye to my prawn noodles for I have the intention of having that by myself. I had a craving for the past couple of days and I want it even more now that the prawn noodles shop near where I stay close for good. Disappointment 1. =(

After that, we make our way to the nursery to get some plants. 1 of our plants was attacked by worms & after removing it, J didn't like that there's an empty space there. I actually had plans on filling that space up with a small set of drawers so I can store my craft stuff there but by the looks of it, I can say goodbye to that idea of mine now... Disappointment 2. =(

When we were done at the nursery, I'm only left with an hour to get my ass back to church for my class! J had to make his way home himself as we're travelling on different directions. Nonetheless, I waited for his bus with him. I was worried that he might miss it since the buses speed like mad around that area. If you don't wave for them to stop, you can forget about boarding it. By the time I reach my MRT station, it was nearly 2 p.m.! I still had to buy some Easter chocolate eggs. You see, I made some boxes & decorated it with a couple of bunnies for the girls in my class. It's sort of like a little Easter present. In the end, I was late for 15 - 20 minutes but it's still alright as I'm not the only one who's late and so, the class has yet to start when I arrive! =) 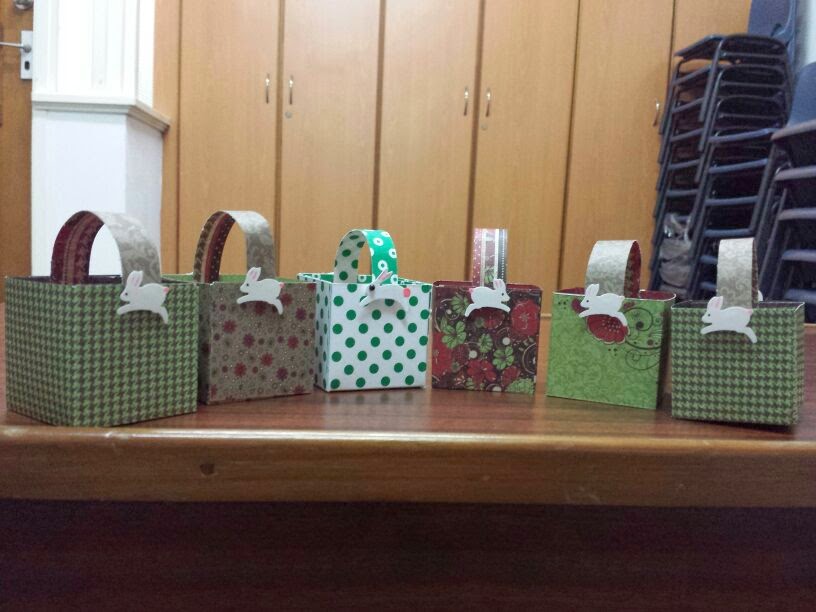 After class, I made my way to AMK as I was craving for Bakso & I wanted to pack some for both S & my dinner. At AMK, I realised I didn't have sufficient cash & there's no atm of the bank I use anywhere near! Bummer. I decided to take the train to Bishan. It's just a stop after all. There's an atm there where I can use their services with the help of atm5. Guess what? The machine just wouldn't dispense the amount to me no matter how hard I tried. I was puffing mad by then. I called S & scrapped the Bakso idea off. I MUST withdraw a few hundreds as I made some purchases over the weekend & it's a cash delivery. =( Hence, I took the trouble to travel all the way to a bank, withdraw my money & make my way home.

On the bus, on my way home, this old lady was busy fishing out her ezlink card & not holding onto the pole for support. She did this while the bus is still moving. In the end, she bumped hard onto me. That really pissed me off. I looked at her & she didn't even apologize! She smiled! What in the world just happen?! I'm speechless. I had thought that the younger generation lack mannerism. Even older generations are this way! Atrocious! Okie...okie...I was tired, hungry & grouchy. I shouldn't get mad with an old folk just because she bumped hard onto me, stepped on my toes, didn't bother apologizing & offered me smiles... Happy now?!

Not so fruitful indeed. I hope your weekend was much better than mine...