J flew to Italy for business.
Only bring me for short business trips. Long ones don't have my share. Hmph!
Oh well... let me fly to Jakarta and experience my 1st solo trip then!

I've never travelled alone.
I've never been to Jakarta.
My flight (Airasia) got delayed which is a blessing in disguise.
Why? 'Cos I underestimated travelling time by MRT.
By the time I got to the airport, I barely have time for dinner!
Luckily, I was told by the counter staff that the flight got delayed by an hour!
I passed through immigration, collected my pocket wifi from Changi Recommend and had a distasteful Laksa at Owl Eating Place.

By the time I reach Soekarno Hatta airport, it was 10 plus at night, local time.
I then took the Airport Bus to Gambir Railway Station.
Just exit from Arrival, turn left and walk all the way down. There's signs though...
Damri ticket counter is very easy to locate. I bought my ticket at 40K rupiah which works out to be around SGD4.30. The rate I got was 1 SGD = 9,300 rupiah.
Just stick around. There'll be a person shouting Gambir. Only then do you go board the bus.
Damri also offers bus services to other locations other than Gambir. Else, there's an announcement every single time. You can't miss it. Don't understand Bahasa? Well, I don't too and I managed just fine...

The journey took around 45 minutes. I read on some blogs that it might take 1 - 1.5 hrs. I guess timing of arrival matters. It does not just travel straight to Gambir Railway Station.
There's a few times where the bus stopped for passengers on board to alight.
If in doubt, just ask the people sitting around you. Jakartans are very friendly people.

By the time I got to Gambir Railway Station, it was 11 plus. I tried looking for Indomart so I can buy the card where I can take Transjakarta buses but due to language barrier, I was unsuccessful. I wasted some time going to and fro. In the end, I gave up and took a taxi from Gambir to the hotel - Mercure Sabang Jakarta. It cost me 40K rupiah. I tried to bargain as the distance was real short but since it's so late at night, I guess I was the loser that day. I did take a taxi from the hotel to Gambir when I checked out and it only cost me 20K rupiah. Depending on the time you arrive, decide in your discretion. For me, I wasn't afraid to walk but I was really tired. I was carrying a backpack you see...

I checked in and it was midnight already. Since I didn't have lotsa time in Jakarta, I decided to venture out for food even though I wasn't hungry. You might be saying - What were you thinking?! So late on a Friday night and you being a female, wanna venture out for food?!
Yes and venture I did! I exit the hotel and turned left. Within a few minutes of walking, I reached the traffic light. There's no green man or red man. I later learned that if you don't know how to cross the road, just look at the side. If the cards stopped, just walk.

Walk I did and before long, I saw a bunch of Black. There's easily 10 of them. They talked really loud, sounding like they are having a disagreement. I must admit that I was concerned and started walking faster. My heart wasn't thumping hard like I'm afraid but it's a situation I would like to get out of FAST! Soon enough, I saw a whole stretch of 'stalls'. They looked like push carts.
I also spotted Indomart shortly and went to buy a card where I can use on Transjakarta buses.

I had my first meal - Sate Padang. It was just outside Indomart. 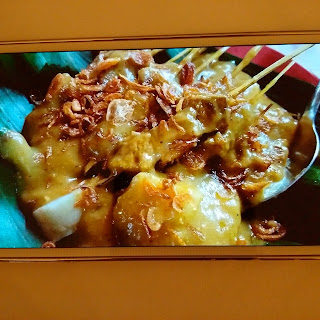 I had this years back when I visited Padang. Didn't like it then but thought I wanna give it another try to recap exactly why I didn't like it. It's all down to the sauce. Just not used to the texture of it.

After my meal, I went back to the hotel as it was getting a bit too late and I've got to get up early the next day. The next time I visit Jakarta again, I'll definitely be staying at Mercure Sabang again!
Such convenience! 5 mins walk to Monas and 5 mins walk to Street Food.