09th August 2015 is the Year of Jubilee for Singapore and boy am I so proud to be a Singaporean!
I went to Marina Bay Sands and I was so surprised with the crowd.
I spent a good 4 hours plus standing all the way.
Is it worth it? Watch on...

Straight after the fireworks, I head for home. Crowd everywhere and it's madness in the train station.
I'm glad I made it home in one piece and pretty early at that! I was so tired, I fell asleep immediately when I hit the bed after my shower.

Come the next day, I brought First Born along with S to Singapore Science Centre. 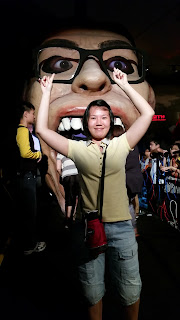 Queued for hours for this - Human Body Works
I had to take a picture standing in front of it.
I was trying to aim for his nose. Oh well... Eyes will do just as well. =)

Other than the Human Body Works, the rest remains pretty much the same. Hence, we decided to take a cab down to Harbourfront to catch a free ride on the cable car. I've not taken a cable car ride in Singapore. I've taken one in Hong Kong though. When we reached there, we were told that the wait will be 8 hours! No thank you... We didn't bother queuing and left for Vivocity which is within the vicinity. Bought some tea for J and took the train home.

So that pretty much sums up my 4-day break for this Jubilee period.
Fellow Singaporeans, how did you fare during the Jubilee period?