Eon years ago, I would fully utilize my time on computer games, mobile games, television programmes and what have you. Then, age catches up and a change of partner 'forced' me to sleep much earlier i.e. no later than 11p.m. That is considered early for a person who used to go to bed between 1 to 2 in the morning.

I've not been having any problems with falling asleep for the past 2 years. It was until the past few days that I'm encountering issues with sleeping. I no longer have the ability to fall asleep with a snap of my fingers. I would only be in dreamland after midnight. That's bad and I didn't like a bit of it!

Tryptophan to the rescue! 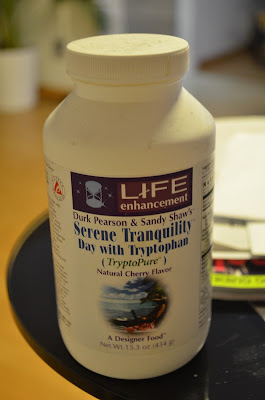 What is Tryptophan? According to Wikipedia, there is evidence that blood tryptophan levels are unlikely to be altered by changing the diet,[19] but for some time, tryptophan has been available in health food stores as a dietary supplement.
Clinical research has shown mixed results with respect to tryptophan's effectiveness as a sleep aid, especially in normal patients.[20][21][22] Tryptophan has shown some effectiveness for treatment of a variety of other conditions typically associated with low serotonin levels in the brain.[23] In particular, tryptophan has shown some promise as an antidepressant alone[24] and as an "augmenter" of antidepressant drugs.[24][25] However, the reliability of these clinical trials has been questioned because of lack of formal controls and repeatability.[26][27][28] In addition, tryptophan itself may not be useful in the treatment of depression or other serotonin-dependent moods, but may be useful in understanding the chemical pathways that will give new research directions for pharmaceuticals.[

On the night of Monday, I mixed 1 scoop of the product with 3/4 glass of water. It relaxes my body. Once my body was laid on the bed, that's about the position I remained in for a long while. This product relaxes my body, making me not having the desire to move my body to a different position. I don't fidget as much = higher success rate in falling asleep. Slowly but surely, I fell asleep. 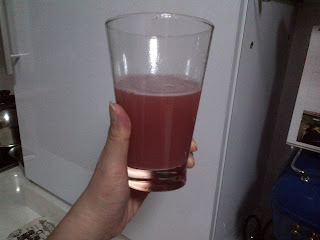 This is how it looks like after mixing with water

I didn't want to depend on this product even though it's au-natural. Hence, I'm going to try falling asleep w/o the help of this product. I guess I would only turn to it when I'm desperate.

I sure hope you've better luck in the sleeping department!