After weeks of being sick, I finally had my back massage done today! I almost forgot how good it felt! I was first down with rashes. That took round about 3 weeks to get better. Soon after that, I was down with fever for a day and a bad cough follows after that. I've been coughing for 1 week plus. I self-meditate initially with the medicine purchased from a pharmacy in one of the Guardian outlets. Yes sure, most of the phlegm has been coughed out but my throat still itch and like the rashes, it's causing me distress. I can't sleep peacefully, having to get up now and then to spit the phlegm out and the amount of coughing is no doubt causing hurt to my throat. I'm now into my 3rd box of Strepsils.

I can tolerate no further and made a trip to Eu Ren Sheng just a couple of days ago. I just hope I get better soon. Somehow, I can't help but wonder what's next when I'm done with the cough. People end the year with parties and I will probably end it being sick.

I've been missing movies for the past few weeks. I'll miss it again tomorrow as I've to attend a class in church after service.

I've been pretty down with sickness and emotional stress from a guy who's such a dumb duck. Friends who know me will know that I wouldn't say dumb duck. Anyway! I decided to catch a movie all by myself! 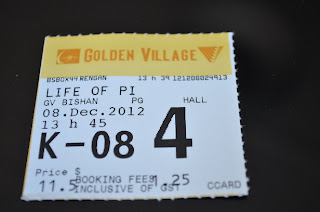 Says who one can't watch a movie alone?! This is the 2nd time I did it and I assure you that I was perfectly normal when I did it the first time round.
I've been wanting to catch this - Life of PI. I saw the advertisement and was mesmerized by the graphics. Besides, I'm a sucker for anything related to cats. There's a really handsome Bengal Tiger in there. The movie is indeed good. The animals bring a smile to my face. Just looking at them makes me so happy. On the other hand, I'm also a sucker for sad songs. I'm now listening to Leslie Cheung's 有心人 (Cantonese Version).
Ok back to the movie! Graphics good but storyline was so-so. By the way, the Tiger's name is Richard Parker. Why and How? The story will tell you that. Funny though. You'll probably be better off waching it @ home in Blue Ray of course! ^^
Dreamy C
Posted by Callie at Sunday, December 09, 2012

Email ThisBlogThis!Share to TwitterShare to FacebookShare to Pinterest
Labels: Movies