White Tigers for my Favorite Kid

White Tigers. I'm always fascinated with them. Very beautiful animals. Tigers and all animals from the cat family, I adore. I've a little one from the cat family myself and his name is Horlick! Alright now. Let's get down to business!

The White Tiger (also known as the White Bengal Tiger) is a subspecies of Tiger. Their colouration is dependent on a defective, recessive gene that is passed on from their parents. The White Tiger has become ever rarer in the wild due to trophy hunting or capture for the exotic pet trade, with there having been no recorded sightings of these elusive predators for the past 50 years.

Today, they can be found in a handful of Zoos and of of it is The Singapore Zoo. Along with the Bengal Tiger, the White Tiger is considered to be the 2nd largest species of Tiger in the world after the Siberian Tiger.

The White Tiger is not an albino as they still carry some form of pigment that creates their fur colour, as some individuals are known to retain an orange tinge to their white coloured fur. 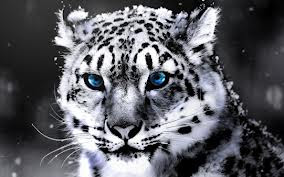 Along with the change in fur colour, the gene carried by the White Tiger's parents also meant that they have blue eyes rather than the green or yellow coloured eyes of normal Bengal Tigers. Despite the beauty of the White Tiger's fur, it does in fact give these individuals a disadvantage as they are not so easily camouflaged into the surrounding jungle.

Although the White Tiger is not nocturnal, they do the majority of their hunting at night as this also helps them to hunt more successfully. White Tigers have incredible hearing and sight which, along with their stealth, helps them when hunting in the jungle in the dark.
Like normal Tigers, they occupy a large territory that is marked by urine and claw marks on trees. Despite the fact that they are solitary animals except for during the mating season, male White Tiger territories can overlap with those of a number of females', particularly in areas which are high in prey. Male White Tigers will however, defend their patch fiercely from other males who may be trying to steal their spot. 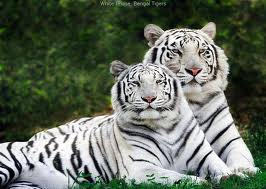 In order for a White Tiger to be produced, both of it's parents must carry the gene. Male and female White Tigers are attracted to one another by their roars and scent marks and once mated, the male and female go their separate ways.
After a gestation period that lasts for around 3 1/2 months, the female White Tiger gives birth up to 5 cubs, which are blind and weigh roughly 1kg each and can have either white or orange fur. 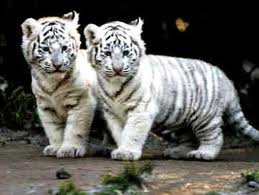 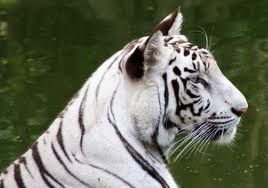 White Tigers have an average lifespan of 12 years, which can be longer in captivity.

The White Tiger is an apex predator in it's environment, hunting it's prey by stalking it sealthily in the darkness of night. They primarily hunts large, herbivorous animals including Deer, Wild Boar, Cattle and Goats that feed both in the jungle and on it's outskirts. 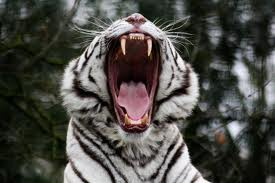 With growing Human settlements pushing the White Bengal Tiger into smaller and smaller pockets of it's historical range, they are also commonly known to hunt and kill livestock, with entrances into villages also becoming increasingly common.
The White Tiger is thought to have a slightly shorter life expectancy than the normal Bengal Tiger. Although there is no evidence of this in the wild, captive studies conclude that it is due to the White Tiger's mutated genes. 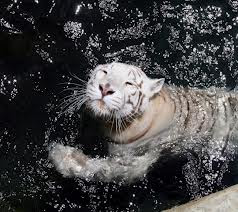 The White Tiger is one of the most versatile and adaptable predators in the Asian jungle as they are not only incredibly quick and agile at running but they are also very capable swimmers, allowing them to breech natural boundaries such as rivers and wetland. 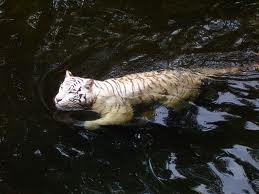 Estimates of around 100,000 Tigers found in the jungles and mangrove swamps of Asia were made at the beginning of the 1900s but today, there are thought to be less than 8,000 Tigers in the wild with around 2,000 of these being Bengal Tigers. There are no White Tiger individuals known to be found outside of captivity. 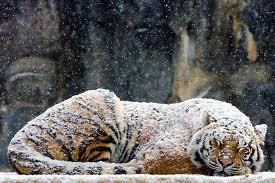 Next up? Let's talk a little about sharks.