I used to carry the iPhone 3GS. Then one freaky accident in Genting caused me to lose it. Let's not go there... And so, I bought myself an iPhone 4 once I got back to Singapore. I've had it for a few years and I'm addicted to it. It's the first thing I reach out for in the morning and the last thing I let go before I hit the sack. I'm terrified at how dependant of it but like everyone else, I CAN'T HELP IT!!! I guess I'm a slave to my phone. I do browsing with it, I play games with it, I message with it. The applications available... Watsapp alone is enough to entice me. Facebook - aren't most of us addicted to it? I know of a few people who aren't and I salute them for it!

Why change then? Practicality comes into the picture and is too strong for the iPhone to overcome. You see, no one phone is perfect. The iPhone sucks BIG time on emails. Even sending emails take such a long time. I'm getting sick of it. The major reason for the decision comes when one of my Indonesian customer commented,"Why don't you carry a BlackBerry? Everyone in Indonesia carries that. Easier to communicate too!" The BB has BBM - BlackBerry Message which acts like Watsapp. Indonesia is one of the major countries purchasing the product I'm offering. In order not to inconvenience my customers and wanting to work efficiently, I've decided to switch to a BB owner. Rest in peace my iPhone!

Thanks to Ms. H, I managed to decide the model. 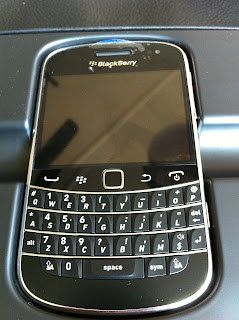 BB Bold 9900
I purchased this at $188.00 with Flexi Value plan with SingTel
According to the SA from Singtel, this gadget has been in the market for at least a year. However, it's the most popular model sought after from this brand. J has used this some time back and he's experienced problems with it. He got it when the phone was just launched into the Singapore market. I believe that any mobile phones will only be better after a while. If you follow the trend and purchase it when it's just out in the market, there's a high tendency of experiencing glitches. Well, that's just my opinion. Having said so much, I hope that this BB be very guai and serves me well many years down the road.
What's going to happen to my iPhone then? Hmmm... I'm not sure if I can take photos with it w/o a sim card. If so, I would very much prefer taking photos with it rather than with the BB. Somehow, the iPhone wins in this category. Don't compare it with DSLR and the likes lah...
Dreamy C
Posted by Callie at Tuesday, September 04, 2012