This is going to be a long blog entry. I'm telling a short story of Yusheng with the help of Wikipedia. See below:

Yusheng, yee sang or yuu sahng (Chinese: 鱼生; pinyin: yúshēng; Pe̍h-ōe-jī: hî-seⁿ or hû-siⁿ), or Prosperity Toss, also known as lo hei (Cantonese for 撈起 or 捞起) is a Teochew-style raw fish salad. It usually consists of strips of raw fish (most commonly salmon), mixed with shredded vegetables and a variety of sauces and condiments, among other ingredients. Yusheng literally means "raw fish" but since "fish (鱼)" is commonly conflated with its homophone "abundance (余)", Yúshēng (鱼生) is interpreted as a homophone for Yúshēng (余升) meaning an increase in abundance. Therefore, yusheng is considered a symbol of abundance, prosperity and vigor.

While versions of it are thought to have existed in China, the contemporary version is created and popularised[citation needed] in the 1960s amongst the ethnic Chinese community and its consumption has been associated with Chinese New Year festivities in Malaysia, Indonesia and Singapore.
Origin of Yusheng
Fishermen along the coast of Guangzhou traditionally celebrated Renri, the seventh day of the Chinese New Year, by feasting on their catches.[1] The practice of eating raw fish in thinly sliced strips can be traced back to ancient China through the raw fish or meat dish known as kuai (膾, kuài). However the present form of yusheng is believed to have started in Chaozhou and Shantou as far back as the Southern Song Dynasty[citation needed].

There is also a legend regarding its originality. It was believed that in south China, a young man and his girlfriend found themselves stranded by bad weather at a temple with nothing to eat but they managed to catch a carp. Chancing upon a bottle of vinegar, they added this to the stripped carp and found it quite appetising.

In Malaya's colonial past, migrants imported this tradition; porridge stalls sold a raw fish dish which is believed to have originated in Jiangmen, Guangdong province that consisted of fish, turnip and carrot strips, which was served with condiments of oil, vinegar and sugar that were mixed in by customers.

LOHEI YUSHENG
Eating Yu Sheng during Chinese New Year is a cultural activity for Chinese living in Singapore and Malaysia, but not so much in other Chinese-populated countries such as Hong Kong, where the practice is almost unheard of. This may be due to the origins of the dish, which was created by 4 master chefs in a Singapore restaurant kitchen way back in 1964, then still part of the Federation of Malaya. It made its debut during Lunar New Year of 1964 in Singapore's Lai Wah Restaurant (Established in Sept. 1963). [[2]] The 4 master chefs were Than Mui Kai (Tham Yu Kai, co-head chef of Lai Wah Restaurant), Lau Yoke Pui (co-head chef of Lai Wah Restaurant), Hooi Kok Wai (Founder of Dragon-Phoenix Restaurant) and Sin Leong (Founder of Sin Leong Restaurant) who, together created that as a symbol of prosperity and good health amongst the Chinese [[3]] . All four Chefs were named as the "Four Heavenly Culinary Kings" of Singapore some 40 years ago for their culinary prowess and ingenuity.[4][5][6][7][8][9][10][11][12]

Serving[edit]
Yusheng is often served as part of a multi-dish dinner, usually as the appetizer due to its symbolism of "good luck" for the new year. Some would consume it on Renri, the seventh day of the Chinese New Year, although in practice it may be eaten on any convenient day during Chinese New Year (1st to 15th Day).
The base ingredients are first served. The leader amongst the diners or the restaurant server proceeds to add ingredients such as the fish, the crackers and the sauces while saying "auspicious wishes" (吉祥话 or Jíxiáng Huà) as each ingredient is added, typically related to the specific ingredient being added. For example, phrases such as Nian Nian You Yu (年年有余) are uttered as the fish is added, as the word Yu (余), which means "surplus" or "abundance", sounds the same as the Chinese word for fish (yu, 鱼).
All diners at the table then stand up and on cue, proceed to toss the shredded ingredients into the air with chopsticks while saying various "auspicious wishes" out loud, or simply "撈起, 撈起". It is believed that the height of the toss reflects the height of the diner's growth in fortunes, thus diners are expected to toss enthusiastically.


Deep-fried flour crisps in the shape of golden pillows is then added with wishes that literally the whole floor would be filled with gold. 满地黄金 Man Di Huang Jin meaning “Floor full of gold” 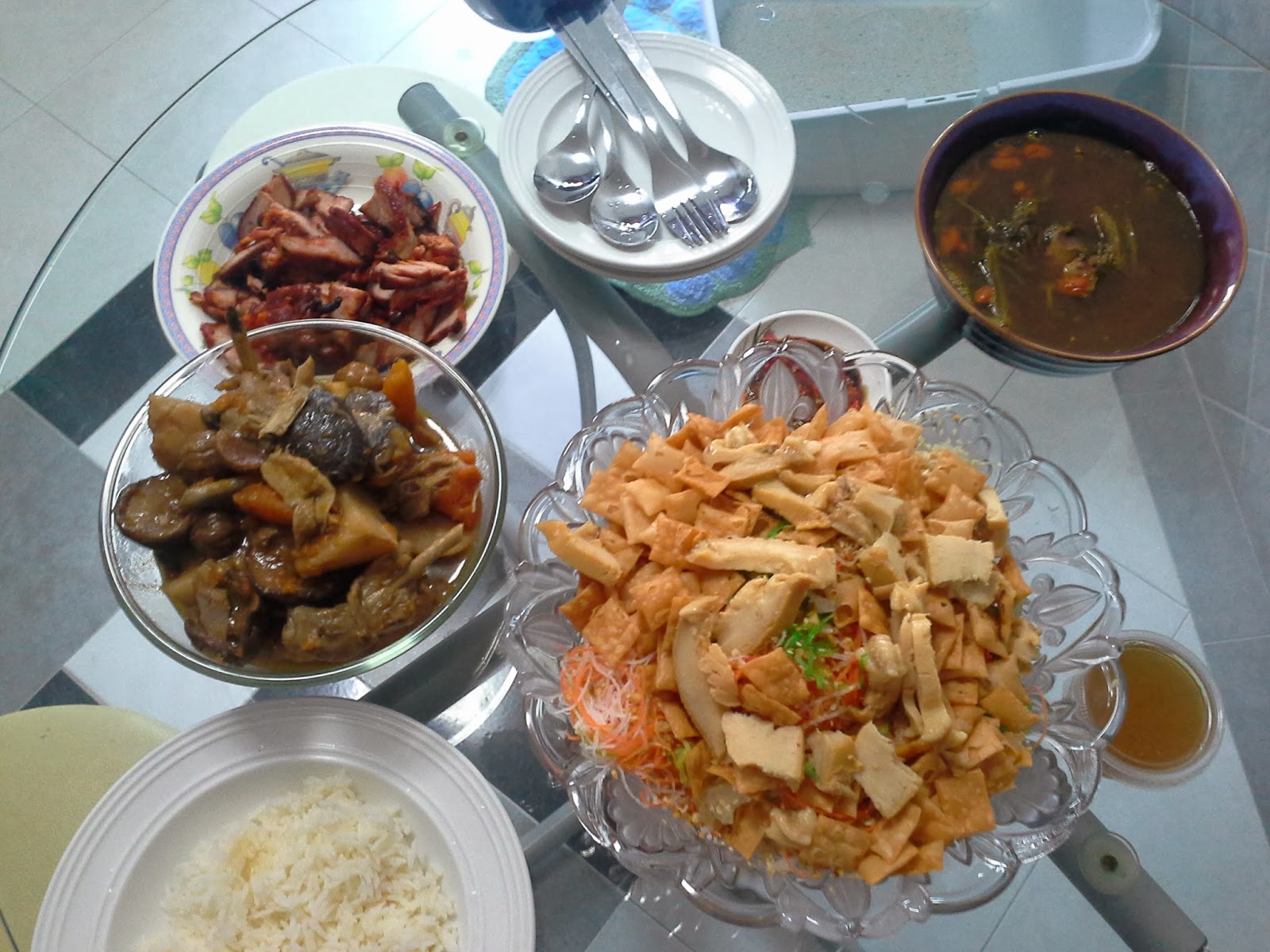 The biggest bowl in glass is where the Yusheng was being contained.

Well, I hope you have a better understanding of Yusheng now. You would be surprised to know that not all Chinese know about this story. I know a little here and there but not all the details. I don't even know what to say when you pour the flour crisps or the sauce etc.!

There will be a video of the action HERE.
Enjoy & wishing you a great day ahead!