Day 2. I was up bright and early! 6 plus local time...
I went for my breakfast at the hotel. The spread was basic. Not much variety but will do for me...

After breakfast, I went to Monas. 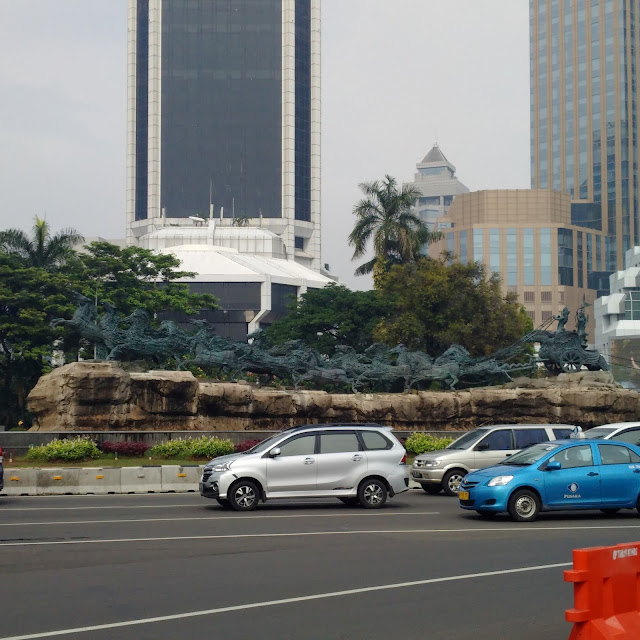 There was some event going on, Anniversary for some schools.
I had a hard time walking around searching for the ticket booth.
Asking the locals gave me some issues. Language barrier becomes more obvious but they are really friendly people. Hence, it didn't really bother me. 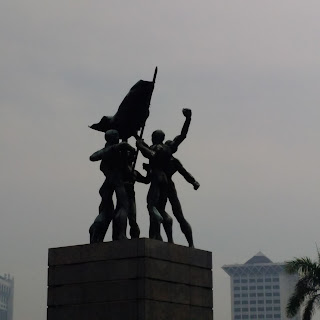 Another statue.
It might look like it's going to rain but I assure you it ain't the case at all.
It was really bright and sunny.
Jakarta is hotter than back home.
Soon enough, I have beads of sweat dripping down the sides of my face.
I like Jakarta all the same. 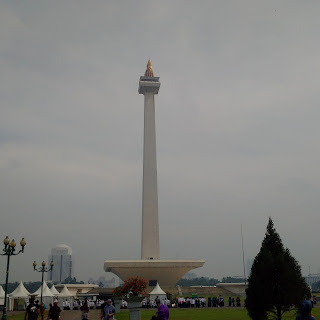 Monas
I must say that the night view of it is much more magnificent.
Next time round, I'll make sure to stay in a room which has a clear view of the entire structure! 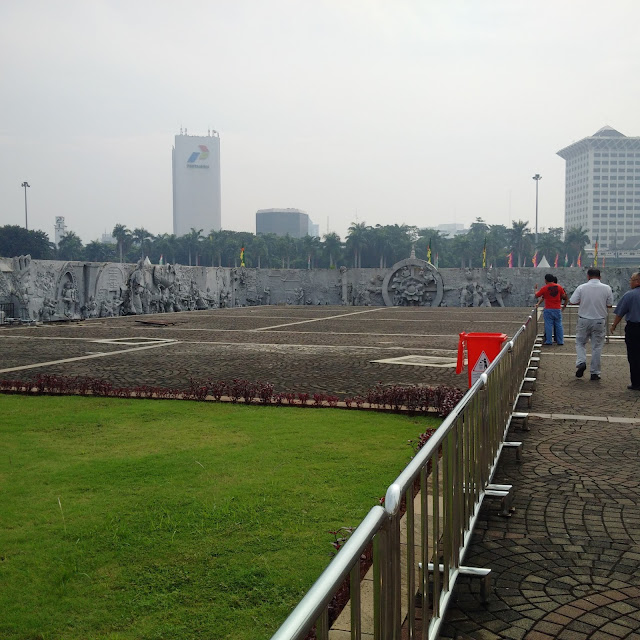 I finally managed to locate the ticket booth.
It was in B1.
Before reaching the ticket booth, there are security guards checking your bags.
As I didn't bring any bag, I cleared that very quickly.
Ticket cost me 30K rupiah but amount on my ticket states 20K rupiah.
Corruption? I don't know really...
This picture is what I saw after having purchased my ticket and walking for a bit.
I have no idea what it depicts. 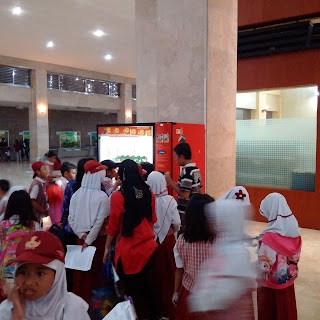 I reached a place which is the base of Monas where it tells the history of Indonesia, back to the time before Japanese Occupation. It was good knowledge.
Here, photo shows a bunch of school kids. All wanting to buy cold drinks from a vending machine. 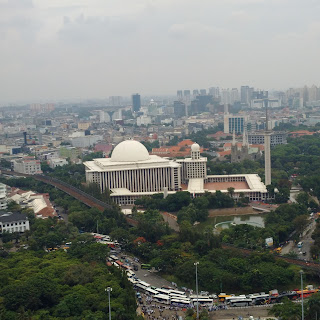 Finally reached the top of Monas.
That's Istiqal Mosque there.
It was really windy.
There were grills on the 3rd floor and none on the 2nd.
Obviously, in terms of view, 3rd floor is so much better than the 2nd. 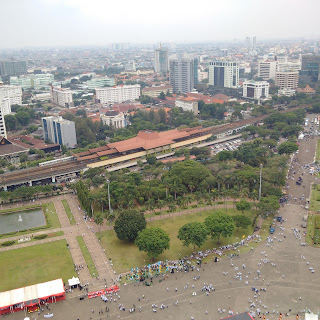 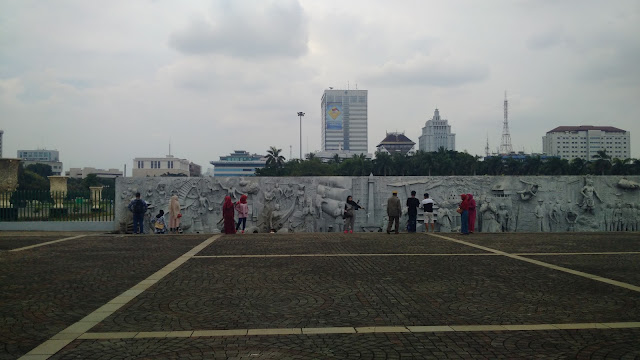 Another part which I saw when I exit 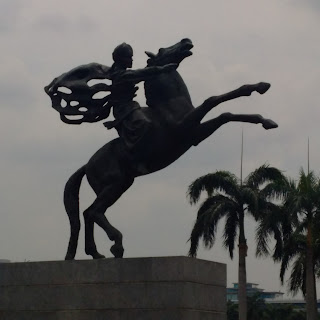 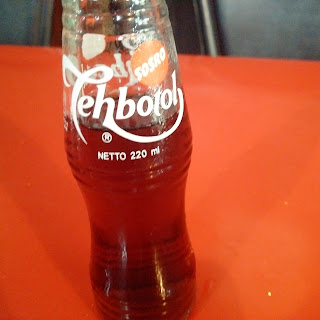 I had wanted to proceed to Istiqal Mosque but my tummy began to rumble.
Time for lunch!
Ice Tea which is really good for the hot weather. 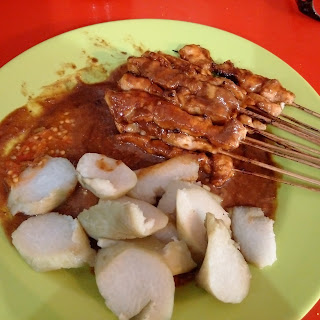 Sate again. Why?
I was walking around searching for food.
I went in to a shop only to find out that they only sell Ice Cream. That explains the crowd.
I then went to another shop and settled for this.
A guy was right outside the shop, cooking sate with charcoal so I thought why not?
Even though Sate is the last thing I want to eat since I've eaten it last night.
However, to comfort myself, last night was Sate Padang and this was Sate.
The sauce is different and I must say I very much preferred this. 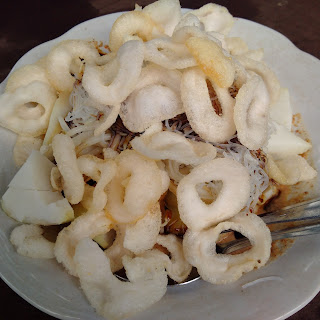 Not satisfied and I thought of going to Glodok to get my food later during the day.
I ended up NOT going to Glodok as I found this under the railway track!
It's just a bunch of push cart stalls selling Ketoprak, Mie Ayam etc.
This is Ketoprak. I really enjoyed this one. Yummy...
There's lots of beansprouts, some bee hoon like noodles, lots of crackers, tofu etc. It's just a bit of a few things. I ordered it spicy and it was delicious! If I remember it right, this only cost 15K rupiah! 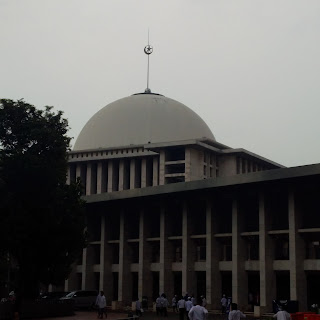 Istiqal Mosque
Long story here but in the end, I didn't get to walk around the entire building.
Did not have a good experience. 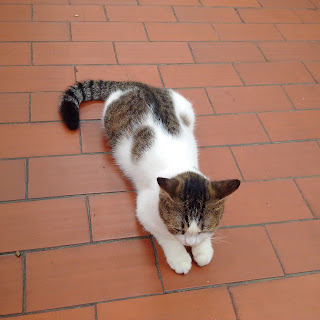 On another note, saw a really beautiful kitty in the mosque.
Could not stop stroking him/her. 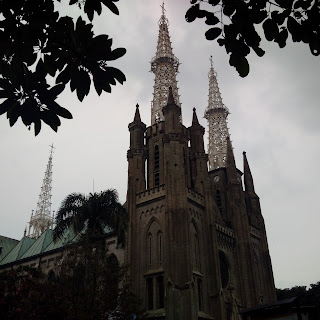 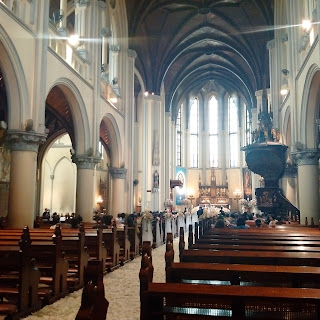 My lucky day - a wedding being held.
There were real birds in this church.
A wedding going on with birds chirping, what a lovely sight. 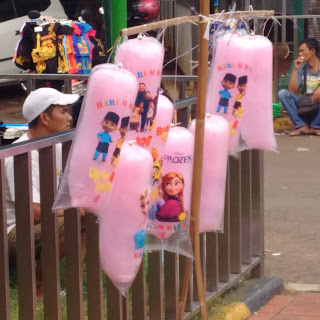 Walked back to Istiqal Mosque to catch a bus back to the hotel.
I could have walked but it was really hot and the weather tire me.
Saw some cotton candy along the way. Did not buy it for fear of the sweetness of it. 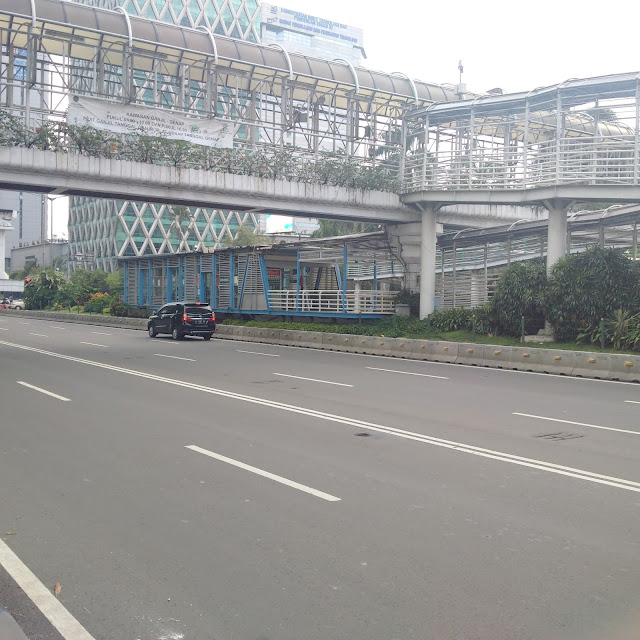 This is how a Transjakarta bus stop looked like.
The system there looked like the system of the MRT back home.
This happen to be the stop named Bank Indonesia which is near the hotel I stayed in. 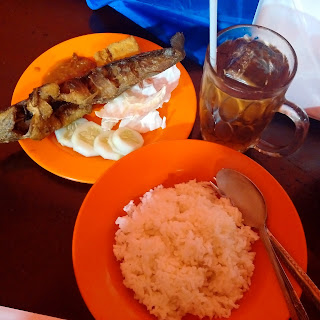 Later at night, after a Body Scrub (which was really good btw...), I went to Sarinah Thamrin where I got some peanuts for J. There were lots of street food there and I was really excited!
This here, my friend is Pecel Lele. It's fried catfish with some cucumbers, cabbage and tofu.
The chilli which comes along with it? Oh my... Best!
The catfish was really crispy and the meat really soft. If I can, I'll order another portion but I really need to keep my tummy space for other food. 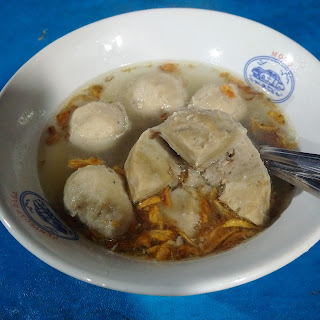 Walked back to the hotel and on the way, I saw BBQ Banana.
No luck as it was closed. Bummer!
Settled for Bakso. The bakso in Jakarta is different from the one in Padang.
I very much preferred the one in Padang. The big ball you see there has mince meat in the middle.
Didn't fancy the big ball. The small ones are more enjoyable in my opinion.
Soup was salty. Didn't quite enjoy this one. At least I've tried.

That about sums up my 2nd day in Jakarta and I dreaded to leave the next day...